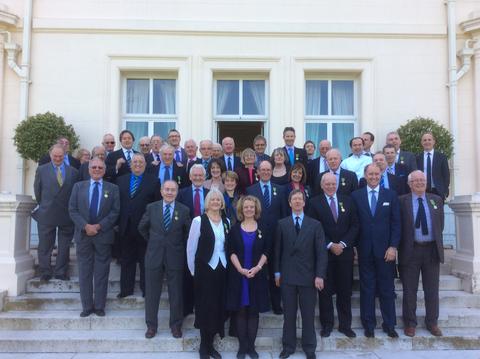 We picked a fabulous day to gather on Kensington Palace Gardens at the French Ambassador’s Residence to see Jancis receive her medal for services to the French WIne Industry – she is now an ‘Officer of the Ordre du Merite Agricole’.

All of the other guests have previously been awarded (or were also awarded today) the lower level of award – the ‘Chevalier de l’Ordre du Merite Agricole, and we were all allowed to wear our medals for the day – very proud! Good to see Mr Tony Laithwaite, and Mr Allan Cheesman in good form – two important mentors in my wine life.

French wine has been good to us, and we have all done our bit to champion wines from this wonderful country. And days like this allow us to pause and give thanks for being in a position to help.

One small observation – we tasted some delicious wines at lunch, but each bottle went round a table of eight. Perhaps this is how the French stay so elegant and thin!

The wine is from the highly-rated 2010 vintage, and is made from Chardonnay, Pinot Noir and Pinot Meunier grapes, which were grown in Herefordshire.

This week it was awarded Gold at the International Wine Challenge.  Justin’s really excited that Hart of Gold has been given such a significant medal in the first year of production. It was the only Gold Medal winner to be awarded to an English wine in this round of the IWC awards.

The judges thought our fizz was, “Generous and fruity, yet elegant and fine.”

Having judged many times at The Wine Challenge, Justin knows how hard it is to impress the judges, and when a wine wins a Gold Medal, it has been tasted and loved by a lot of really good, and discriminating tasters.

For more information on Hart of Gold go to www.hart-of-gold.co.uk 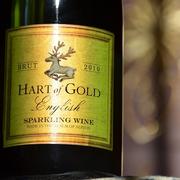 Justin is very proud to have been shortlisted for the The Julian Brind Memorial Award for Outstanding Achievement in the Wine Industry by the IWSC.

Julian Brind was the inspirational driving force behind the excellence and professionalism of the Waitrose Wine Department. Justin led the team at Waitrose for 5 years, and Julian’s legacy there was clear – an unremitting focus on quality, and obsession with value for money, and a true desire to focus on the new and the different.

This is one of the wine industry’s most important awards that recognise excellence, and Justin is absolutely delighted to have been shortlisted.

Over the last 10 years, The English Wine Industry has built up to producing and selling approximately 2 million bottles of English Sparkling Wine.

For the vast majority of that period, we have been in a situation of undersupply, with even big players like Ridgeview and Nyetimber having to ration their wine to customers like Waitrose, and not able to supply new accounts, as there simply has not been enough wine to go round.

The huge boom in plantings in the late 2000’s has now resulted in enough vines in the ground, producing a crop, to make 4-5 million bottles a year. More vines have been planted since 2010, although the pace of planting has slowed a little.

The very poor vintage of 2012 has delayed the onset of this new volume hitting the market. We are now in the calm before the storm where new labels are springing up all over the place, but, as yet, without the capacity to make (or the necessity of selling) very large volumes.

All of this changes once the 2013 and 2014 vintages come on stream – both of which are predicted to deliver in the region of 4-5 million bottles (and maybe another 4 million in 2015, and potentially 4-6 million a year every year into the future).

There has been a scramble among producers to gain listings with the right kinds of customers, while supply is still quite scarce. Demand from gatekeepers is high, as buyers – tuned in as they are to the zeitgeist – are enthusiastically adding listings of new and exciting wines, in the quest for novelty and differentiation.

But this honeymoon phase won’t last for long once the oversupply starts to kick in, and producers begin to compete for opportunities to sell significant volumes of their wine. Rather as gin brands have proliferated in recent years, English fizz labels are two-a-penny, and many of them, while attractive propositions, have not yet built up any real brand equity, or consumer franchise.

The balance of power will shift away from the producers and towards the buyers, and producers who haven’t controlled their costs very well, or who do not control their own route to market, risk being squeezed out. Buyers can smell blood in the water, and won’t hesitate to exploit the situation ruthlessly if producers start to find themselves in difficulty.

In my view it is really important that in order to ensure a successful future for English Sparkling Wines, our producers do five things:

1. Remain fanatically committed to quality, and refuse to put out wines that may devalue the positive impression that prevails among the converted drinker that ‘English Sparkling Wine is better than Champagne’

2. Hold their nerve on pricing, and not start a race to the bottom in order to shift volumes of unsold wine.

4. Maintain a united front, and to work together to market the ‘English’ proposition, rather than squabbling about regional differences (which may develop in parallel, but should only ever be a supplementary designation).

I think that the history of New Zealand Sauvignon is a good model for how the market for English Sparkling Wine could develop.

This too was a premium product that was NOT cheaper than the French archetype, but tasted really good, if not better. It was marketed skilfully through a long period of undersupply, and just about weathered periods of significant oversupply without badly devaluing the proposition.

There were times when NZ producers flooded their existing markets with cheap ‘me-too’ brands, but they seem to have recognised the damage that this can do (and maybe still is doing), and have focussed on opening new markets (especially the USA), which has relieved the pressure somewhat, and helped to maintain a viable grape price.

There are a number of parallels with English Sparkling Wine, but I fear that unlike NZ Sauvignon, the difficulty we have in the UK is that all of the Sparkling Wine producers’ business plans are built on the majority of wine being sold at a price point equivalent to Grand Marque Champagne.

This may be achievable in the longer term for some niche, premium producers, and for the top tier of the larger producers, but don’t forget that the market for un-discounted Grand Marque Champagne around the world is quite small. In England, maybe 10 Million of the 35 Million bottles of Champagne we drink every year are sold at over £25.

In England, it is realistic that English wines could take a 20-30% share of this market over time, where patriotism, and ‘localism’ play a big part, but it is hard to imagine English Sparklers gaining more than a 5% share of the £25+ fizz category in other markets.

If you are a consumer in the USA, or Asia, buying a bottle of English Fizz may appeal once or twice as a curiosity, but there is little rationale for it becoming a regular choice when you can have ‘the real thing’ for the same price, or less.

Whether in England, or in New York, Tokyo or Berlin, selling 5 million bottles a year of English Sparkling Wine is not going to be easy.

A couple of weeks ago I had an extremely pleasant surprise, when wine writer and excellent arbiter of quality, Andrew Jefford, called to interview me for his weekly Decanter column, ‘Jefford on Monday‘.

His article talks about my wine career, taking particular interest in how Domaine of the Bee came into being in the Roussillon, and why I have turned my attention to English sparkling wine, with Hart of Gold.

His eloquent and detailed praise left me (almost) speechless, and his thoughtful profile was the perfect start to my summer.

Justin is delighted to be co-hosting a one hour industry briefing on behalf of the International Cool Climate Wine Symposium team, with Dr Jamie Goode at the London Wine Fair. The session will focus on the challenges of producing and selling cool-climate wines.

I am really proud of Fleur Pushack, who works for me 2 days a week at The Hive, who has won ‘The Freixenet Bursary’ – A study visit to four Spanish wine regions as the guest of Freixenet and associated companies, which is awarded to a high achiever in Unit 3 Light Wines of the World in the WSET’s Diploma Exams.

This is a great result for Fleur, and no surprise to me, as her knowledge and determination are matched only by her enthusiasm and positivity. Well done Fleur!

Justin is pleased to be involved in the ‘March for the Independents’, a new one-day conference, held in London on Tuesday 3rd March, 2015. It’s focus is to champion the voice of the independent retailers.

Despite significant challenges, the future of the UK independent wine sector looks bright, it’s worth nearly £500 million and growing. Wine Intelligence research from November 2014 noted that the number of UK independent retailers has increased by 50% between 2007 and 2014 to more than 750.

Justin will be speaking on a panel, to discuss ‘How to make the most of online sales and make it a vital profitable part of your business’. To register for the event click here.

If you are attending ProWein in March, please come along to the ‘Masters of Winemaking’ tasting, hosted by The Institute of Masters of Wine on Sunday 15th March, 6-8pm.

This is a unique tasting, where Master of Wine winemakers will serve their own wines.  Justin is delighted to be showing his ‘Domaine of the Bee‘ wines from Maury, alongside other MW winemakers from Germany, Austria, France, Australia, New Zealand, Spain, and South Africa.

This event is free but you need to be registered here otherwise entrance will not be permitted. 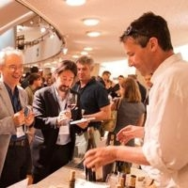 Speaking at this year’s Digital Wine Communications Conference in Montreaux, Justin is quoted in Harpers talking about the importance of understanding your customers, having a clear and simple message, and talking to them in a language they can relate to.

Justin speaks of his experience with Laithwaite’s customers, “that they are ‘wine enjoyers’, and like buying and drinking wine, but were not interested in being immersed in it.”

Check out my own wine

As well as consulting to a number of clients, I have also been making a critically acclaimed wine called 'Domaine of the Bee' in the Roussillon region of France, since 2007.

I am based in London, and travel frequently to our vineyard especially at harvest time in October.