At the International Wine and Spirits Competition Awards Dinner on Wednesday night, Justin was delighted to be jointly awarded the Julian Brind Memorial Award for outstanding achievement in the wine industry.

The judges described Justin as ‘one of the industry’s most creative thinkers and most active do-ers’ and singled out his role in the success of the International Cool Climate Wine Symposium.

Justin said ‘I was lucky enough to work with Julian for a short time at Waitrose, and he instilled in all of us his insistence of quality first. He was also a man with a keen eye for a bargain!. He was an inspiring man, and a pioneer.’ 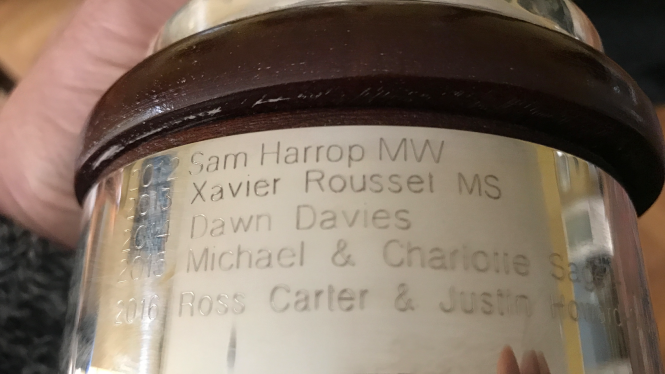 The celebration began on stage, and lasted well into the night….

Justin is very proud to have been shortlisted for the The Julian Brind Memorial Award for Outstanding Achievement in the Wine Industry by the IWSC.

Julian Brind was the inspirational driving force behind the excellence and professionalism of the Waitrose Wine Department. Justin led the team at Waitrose for 5 years, and Julian’s legacy there was clear – an unremitting focus on quality, and obsession with value for money, and a true desire to focus on the new and the different.

This is one of the wine industry’s most important awards that recognise excellence, and Justin is absolutely delighted to have been shortlisted.

Check out my own wine

As well as consulting to a number of clients, I have also been making a critically acclaimed wine called 'Domaine of the Bee' in the Roussillon region of France, since 2007.

I am based in London, and travel frequently to our vineyard especially at harvest time in October.